I am working on a novel about Lillian Hellman and Tennessee Williams. A twenty-something narrator called Bill Kuhn discovers an almighty dispute going on between two of his literary heroes, becomes caught between them, and is shocked when the weight of two celebritiy playwrights suddenly lands on him.

I am also working on a narrative account of Isabella Gardner, John Singer Sargent, and a series of her other proteges.

Sargent's portrait of Virginie Gautreau cut short what had, up to then, been a meteoric career. Up until 1884 he was considered an unstoppable young man. Parisian critics denounced the profile as bizarre, even ugly. Her fallen shoulder strap seemed to suggest Madame Gautreau was a fallen woman, a courtesan, a prostitute. Her mother demanded that the portrait be taken down. Sargent put the shoulder strap back up and he made the identity of the sitter anonymous. The portrait became known as "Madame X." It didn't do any good. The damage was done. His portrait business dried up. He soon left Paris, which he loved, and with the help of Henry James, tried to re-establish himself in London. He considered giving up painting altogether.

Isabella Gardner enjoyed being provocative. She dared Sargent to get back on his horse in the wake of his Parisian embarrassment. She challenged him to paint her as a Boston version of Madame Gautreau. This is the result, Sargent's most famous portrait of her, painted in 1887-8. During its first Boston exhibition this painting also caused a scandal. The low neckline was considered suggestive and indelicate. Mrs. Gardner's husband asked that it never be exhibited again in his lifetime. Sargent, however, received a rush of American commissions. As for Mrs. Gardner, she successfully affronted Boston's establishment in a way she always loved to do. It was also the beginning of their friendship, which lasted for almost 40 years. 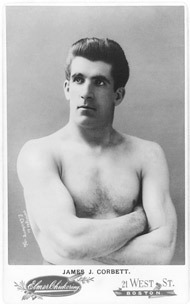 Gentleman Jim Corbett. Isabella Gardner invited him to her living room to give a boxing demonstration. The audience was a group of ladies.

The Wit and Whimsy of Isabella Gardner

1 The Victorian strong man, Sandow, gave exhibitions of his physique. These were ordinarily for an all male audience. But she wanted to see him too. When she met him, she asked to feel his biceps.

2 She went to see Sumo wrestling in Japan and remarked on the wrestlers' nakedness. She confessed to a friend she had enjoyed it. She was going to see the Christian missionaries in Osaka in order "to atone" for it.

3 She had a pair of antennae with two large diamonds at the end. She wore this instead of a tiara.

4 Boating down the Nile in the 1870s, she loved the monks who swam out to the boat to meet her. They had no clothes on. She wrote home she was sure they were equally without sin.

5 Her motto was "Win as though you were used to it. Lose as if you liked it."

6 She sent such a big bouquet to the king of Italy that he thought she was making a pass at him. The American Ambassador had to go and call on him to say her motives were innocent.

7 Her grandfather on her mother's side owned a bar. She made Boston's proudest families climb a horseshoe staircase to say hello to her on the opening night of her new house-museum in 1903.

8 Her husband liked Burgundy. Her favorite food was corned beef.

9 On her last drive out before she died, she wanted to go see the march of a fraternal order dressed in their regalia. She thought driving in the country was boring.

Sargent painted a number of self portraits. None of them are very revealing. In all of them he is hiding behind his beard. He gives no flicker of personality. His face is his mask. To find him where his heart is beating, you have to look at his work. There is currently disagreement about whether or not he was gay. I think he was. But that's not the only explanation for the variety of luscious images he created.

Sargent grew up in a series of rented rooms and furnished apartments. His mother had decided before he was born that living in the States was bad for her health. Living in Europe was the only thing that made her feel well. Sargent's father was a Philadelphia doctor with a promising practice. He reluctantly gave in to his wife's self diagnosis and agreed to raise their family abroad. Mrs. Sargent had an annual income from her father's estate. It was not large, but it was big enough for them to be able to live in Switzerland during the summer and to spend the winter in Italy. Sargent grew up with the feeling of tension between his parents. His father never expressed his regret at having to give up his medical career. His mother was too generous and loving to remind him that they lived on her money. Very little besides their clothes and their books in their rented rooms belonged to them. The trunks and cases were stored away in odd closets, ready for the next move, probably in about two or three months' time.

Isabella Gardner loved young men. Was it because she lost her only son when he was two and had no other children? Or, was it something about handsome bachelors that drew her to them? Was she mother or was she mistress? Or a little of both? Here she is with the circle of bachelors who spent weekends at Beauport on the Eastern Neck near Gloucester, MA. Henry Davis Sleeper (second from left) bought, built, and decorated the house, now owned by Historic New England. Abram Piatt Andrew (far right), Sleeper's friend and sometime lover, was his next door neighbor.

Isabella Gardner was so angry when she saw this etched image of her by the Swedish painter, Anders Zorn, that she had him destroy all the plates. Yet, he captured something of the engagingly preposterous and the absurd about her. It was what made her such good company. She liked to wear fur coats and a jeweled headpiece with diamonds standing out on the ends of little antennae. They wobbled as she walked.

She was a rich woman with a good figure, but her mouth was fiendishly difficult to paint. If painted accurately, it made her look plain. Whistler, Passini, Bunker, Zorn, and Sargent all tried to do it. The best of them fudged her mouth. The worst made her look ridiculous, even ugly. She was not a forgiving sitter. She was prepared to pay a high price for her portrait. She expected for her money to have a picture that made her look good. She did not apologize for being vain. She had a kind of childish candor about it. When she admired herself in a portrait and approved what she saw, it was as if she were mocking herself at the same time. Painters seldom remembered the frustration of having to re-do her portrait. They remembered what fun she was to be with.